Esponsorama Racing have defended their rider, Johann Zarco, following Sunday's horrific crash at the Red Bull Ring, stating that the two-time Moto2™ World Champion actually braked later on the lap of the crash than on any other lap during the Austrian Grand Prix prior to the red flags being brought out. The Frenchman was tangled up in a crash with Petronas Yamaha SRT's Franco Morbidelli that shocked the world as both Monster Energy Yamaha MotoGP riders, Maverick Viñales and Valentino Rossi, narrowly avoided disaster.

In the aftermath of the crash, Zarco came under fire for his actions during the incident and, as a result, his team have come out in support to say that the criticism he has received is totally unfounded. Unsurprisingly, the Frenchman himself was shaken by the incident and he went to personally speak with Morbidelli and Rossi to try and quell any frustration that might have arisen due to the crash. 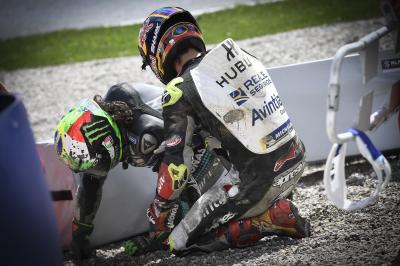 Meanwhile, Esponsorama Racing revealed some key information from the number 5's data during the Turn 3 crash: "After the comments and statements that have appeared, Johann Zarco is very affected since at no time has he intended to carry out a maneuver that would endanger any other opponent. However, the French Esponsorama Racing rider wanted to apologize and clarify with each and every one of the riders involved.

"Despite this, after the dispute of the Austrian Grand Prix, telemetry has shown that, at the time of the accident, Zarco brakes later in Turn 3 than in the rest of the laps of the race, so from this analysis it follows that at no time is his intention to impair Morbidelli's braking and close his line."
Posted on: 21 Aug 2020, 14:42